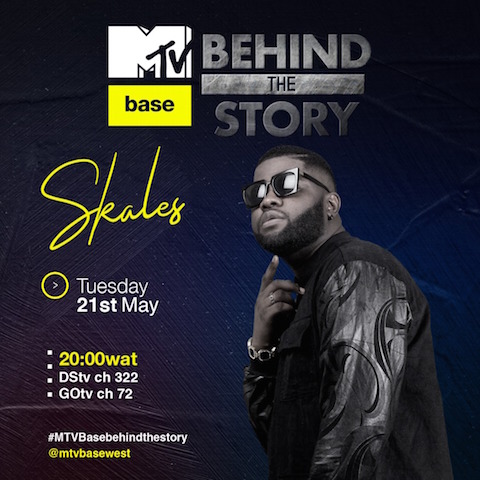 MTV Base’s hit show, ‘Behind The Story’ is returning with yet another show stopping episode with Nigerian pop star, Skales. The popular music show, hosted by Sammy Walsh, takes fans of the ‘Shake Body’ singer down memory lane to his humble beginnings as the singer shares his story like he has never done before. Set to air May 21, the episode finds Skales revisiting places that were pivotal to his rise to the top and talking about the moments that made him.

There are many facts about the “Booty Language” crooner that many fans would be surprised to learn about which are unraveled in this edition of ‘Behind The Story.’ For example, many fans would be surprised to find out that Skales is actually an acronym, which stands for “Seek Knowledge and Acquire Large Entrepreneurial Skills.” Skales also opens up about his relationship with his estranged father as he responded to Sammy’s question on what the status of their relationship is. He said:

“My parents separated when I was between three and four years old so I have no clue where my dad is. We have no relationship till date.”

Speaking on relationships, Skales also addresses the topic of his relationship with his former label mate, Wizkid, as well as his romantic relationship status and fatherhood allegations. Skales reveals his uncensored self during the course of this interview by tackling many personal topics and clears the air about a number of rumours. Catch Skales’ unfiltered Behind The Story interview on MTV Base when it airs on May 21 at 20:00 WAT (8pm).